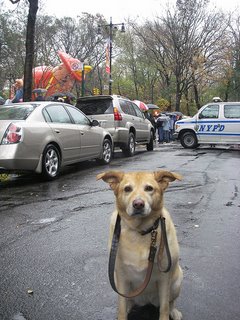 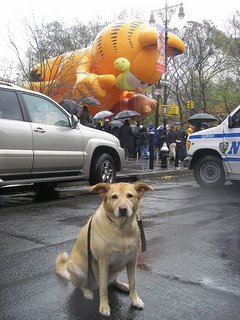 It was a wet and windy 80th Macy's Thanksgiving Day Parade. I was going to stay in and maybe watch it on TV, but you know dogs. Despite the weather, they still want to go out!
I could tell Mena was a little upset that the parade features Garfield but not her favorite, Ody.
Posted by Heather Kovar at 6:34 AM 1 comment: 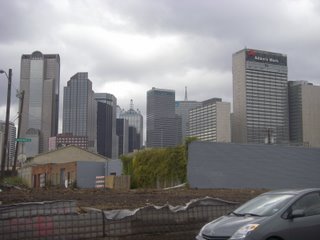 Maybe each individual is just a particle of the universe.
Sometimes I feel I am swept up with all the others like specs of dirt and blown around tornadically as whirling dervishes.
Pieces of me slough off, merge with others in my whirlwind. Some of their debris sticks to me. In each whirling moment, certain particles are picked up, chosen to spin together. Travel is sometimes short or long, though I don’t always recognize my companions or know why they are there. The ones who look familiar have just picked up some molecules from previous travel buddies of mine which took from me and gave to them.
They are me. 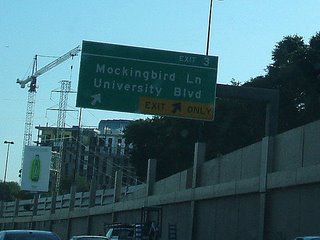 I just returned from my ten-year college reunion at SMU in Dallas. I saw the people I expected would be there: the student leaders who were always organizers. Most were my sorority sisters so it was delightful. I also began my journalism career in Dallas, so I also had professional contacts to visit. This was inspiring as well as nurturing. Plus I had to tour Dallas. Unlike many Northeastern cities which lose businesses everyday, Dallas is growing. I’ve dubbed it Crane City. I saw eight in one view span. It’s all very upscale and progressive. Yet I didn’t take many pictures despite the changes. It’s like going home. How often do you keep taking pictures of where you are from? 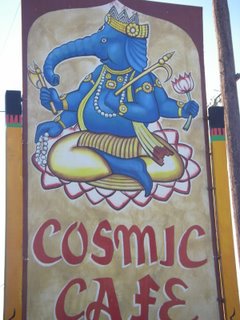 However, the last picture I took in Dallas was of the elephant on the sign at my favorite Indian food café. For the last three years I lived in Dallas, the Cosmic Cup was my spiritual center. There is a meditation room upstairs. I’ve always snubbed vegetarian food, but not even my favorite medium-rare steak can compare to the (now Cosmic Cafe's) spinach dish or nan.

The owner gave me a ride to the airport. I had just stopped in with an hour before I was to call a cab. He said since I supported him while he was struggling, he would do for me while in need. I realized I hadn’t found my cosmic center in New York yet. Somehow a favorite corner bodega just won’t do. But it might now be time. It took four years to find the Cosmic Café. I’ve been in New York just a bit longer.

I was the airport in time, but then they selected me for a thorough screening.
After packing, I found my sneakers still on the hotel floor. The only way they would fit was to put one in my carry on and one in my checked bag.
I was held a bit while they took my left Newbalance apart. It was explained to me that just a few months ago a man with the same shoe packing theory had vials sewn in his carry-on shoe. He explained he was testing the system. They didn’t tell me what happened to him. 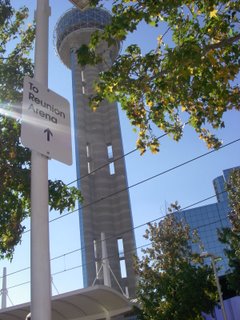 But I boarded my plane after it was only delayed 30 minutes. We taxied out, but then were told it would be an hour-and-a-half delay. Then another hour-and-a-half.
As people were moaning over not having any food or drink, the man in the seat next to me opens up his laptop and his screensaver is a picture of a very similar elephant to the one painted at Cosmic Café.

He turned out to be a Yoga instructor and was studying eastern language. He was calm during the seven hour ordeal, even when others were shouting about their situation via cell. We were delayed because of the weather back in New York City, but upon take off, I knew we were projected to land during the height of the high winds and thunder storms.
Looking out over the clouds as the pilot announces we will be landing shortly and on the ground in about thirty minutes, I say to my neighbor, it's going to be fun breaking through those.
“It’s a vision of an after-life.”
I should have taken a picture of this galaxy we were in.
But nearly an hour later, we were still in it. Struggling to break into the world below. Had the ride been any rougher he would have had to lead me in breathing exercises. Yet the landing was smooth despite the screeching and sliding of the brakes trying to stop our whirlwind.

He gave me a pass for one of the places he teaches yoga. It’s a place I walked by for the first time a few weeks ago and thought I should check out.
Posted by Heather Kovar at 10:55 AM No comments: Willamena is beginning a Beatnik tour of New York City. She begins in the Columbia University area where Jack Kerouac and his crew had some classes.
She also visits an apartment Allen Ginsberg once lived in on West 92nd, then stops by her old abode on West 92nd!
Here she stopped a bookstore near CU to drool over HOWL.

Posted by Heather Kovar at 4:13 PM No comments: