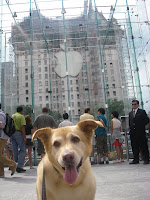 I-PHONE? Thought it was my I-PAW!
Willamena wanted to check out the hype that had people lining up and sleeping outside of the Apple Store in New York City here on 5th Avenue, as well as at at stores around the country, for the past week.

Here you can see her favorite Plaza Hotel through the glass store. 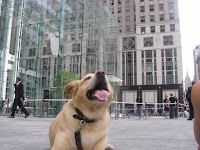 She arrived just hours before the I-Phone went on sale. Despite security guards, media and the crowds, Mena was able to circle the store, looking for a place to cut the line.

However, once this I-Dog realized the fuss was over an I-Phone instead of her eagerly anticipated I-PAW, she became more 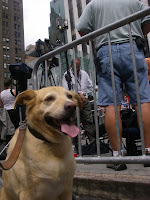 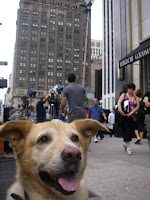 She still had a good time, pushing through the crowd to get an upclose view of the action. 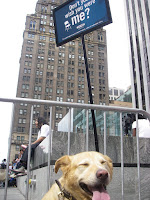 And of course, the News Hound had to hang around with the photo crews.

Though, even had it been the I-PAW that was going on sale, she admits she wouldn't have wanted to spend the past several days in the oppressive heat and thunderstorms to get one. 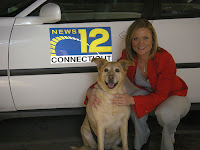 When I walked in the door this morning, my producer asked why didn't I bring my dog Willamena to work on this National Bring Your Dog to Work Day.

We talked about it on set yesterday, saying how good Mena would look onset with me. Two blondes. Honestly, though I didn't consider it. Maybe if she was a fit-in-my-purse dog. I joked she didn't feel like getting up at 3:30 this morning. Though she was the one wagging her tail and panting at my toes to get up and take her out!

She would have loved to come in today and shed hair all over the anchor chairs. But I look at it like this. I bring her to work all the time! Look how often she appears over on my work blog. My boss even joked once that she gets more air time than some anchors here.
Actually, it looks like Mena has been on vacation since March.
Here she helps with a Beatnik blog. She also goes "on the road" to showcase Irish restaurants in Bridgeport, Connecticut.
Posted by Heather Kovar at 6:00 AM 2 comments: Links to this post 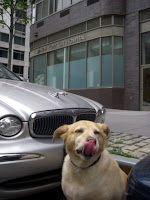 The art reception was Delicious!

Here is the picture that I have hanging in a Jaguar license plate frame. I actually made a series of four. You'll have to go to Crest Auto Mall to see them all this month of June.

Thanks to everyone who came out. The first picture is of the two artists: myself and Lori Golias.

Helping out opening a bottle of bubbly is Michael J D'Angelo. He is working to keep American young with his Univera Life Sciences products. Yummy. 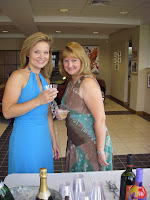 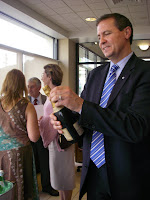 Check him out here. 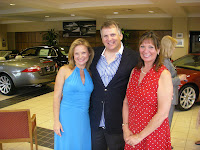 And Eric Greene, my co-anchor joined us for the fun as well.
This is us with Priscilla Lynn.
Posted by Heather Kovar at 3:33 PM 4 comments: Links to this post 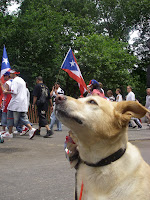 Wigglemena, aka Mena-udo, really wanted to shake it at this 50th Puerto Rican Day parade in New York City, but she just couldn't squeeze safely through the crowd to do so.
The parade runs from 44th to 86th along 5th, so the first effort was 72nd and 5th. That is where she usually sees the St. Patrick's Day parade, but it was much more crowded today than she is used to. Organizers did expect more than 80-thousand people to attend. City figures show more 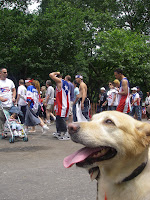 Mena tried a different spot, near Central Park South and 59th. But still, she couldn't get close enough to the actual parade on 5th Avenue to see superstars Ricky Martin or Jennifer Lopez, or even any floats for that matter. You'll have to read this New York Newsday article for what was going on along 5th. 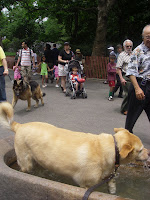 However, we did see the "second tier" parade. Lines of non-stop people walking through Central Park, trying to get to a spot where they could see the main parade.

Before heading back, Mena spotted a drinking trough for dogs, donated to the city by the ASPCA. But instead just lapping it up, she took a lap. She jumped right in to cool off. You can see in the bottom picture the approaching jealous German Shephard. The hair down the middle of his back is standing up! Yet Mena wasn't phased.
See, she got to shake it anyway. Shook off the snarl from the dog and the water, then she enjoyed the rest of the second-tier parade.
Posted by Heather Kovar at 2:37 PM No comments: Links to this post

Known for magically making an entire bag of treats or jar of peanut butter disappear in seconds, Mena admires like minds.

So last year in May, the merlin herself made it out to see David Blaine as he spent a week in a water-filled ball in Lincoln Center. 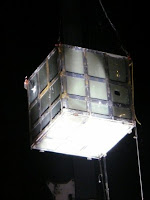 He was napping when she stopped by, you can see his feet sticking up. He later escaped 150-pounds of chains after holding his breath for nine-minutes.

A little more than a year later, the next guy who also started out whooing crowds with street magic pulls off his public escape.

Criss Angel was just west of Times Square hanging in this concrete filled box. He had to escape before the box came crashing to the ground. The stunt was to promote Angel's new season of illusion and magic on A&E.

Angel has been promotion mode for a while. On Oprah last month, he 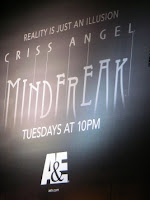 broke Houdini's record of escaping from a straight jacket while hanging upside down.

The illusionist has also been traveling the country signing his book and DVD's. In his book, Criss reveals how some of his stunts are performed.

And that is where he and Mena are similar. She too, likes to unveil the mystery.

For example. The time she ate an entire pan of brownies that were left on the top of the refrigerator. Okay, so you think, the brownies must NOT have been put up high like thought.

Doubts cloud your mind as to how something you specifically remember doing must not have happened.

As Criss says, Reality is Just an Illusion.

But then, the trick made known.

Standing in the kitchen one day begging for treat, Willamena did a standing jump to land with all fours on the waist-high counter next to the refrigerator. From there, the brownies would have been within easy reach. 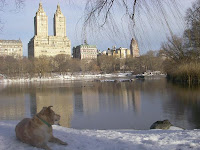 Some of the pictures of Willamena roaming New York City are on display at a Jaguar Dealership in Connecticut.
She also took some pics with Jags around New York. We found one parked in front of the "New York Cat Hospital" on the west side. Check back- I'll get one of those posted soon!
Mena's art is up along with some of my paintings. Here are pictures of us hanging the artwork.

Here I am with my new Jag.
Mena likes this one because she likes riding with the top down.

Posted by Heather Kovar at 6:44 AM 2 comments: Links to this post