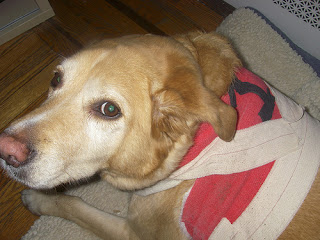 It's not cashmere, and it's not licensed to any particular sports team despite the # 1.
And hopefully this outerwear doesn't start a trend, especially for Willamena herself.
But this new little get up was a $ 514.oo set back.

Unfortunately its a bandage from a dog bite. Mena was in a dogrun, and some dog just wanted a taste of her. He didn't just rip some hair out, he left a near four-inch slice.

It happened on what was the coldest day of the season so far, with wind chills making it feel below zero. I wasn't immediately sure what to do, since Mena's normal vet is in Connecticut near her vacation home. But just about a week earlier someone told me I had one of the city's best vets across the street from my apartme 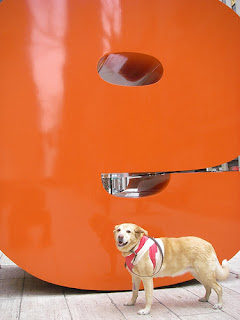 nt; just that there was always a three week wait.

Luckily, even though it was early Friday night, the vet was open and once they saw the gnash, the vet came right out and checked and agreed she'd need stitches.

He said the original bandage slipped, so he had to wrap her up in this jersey.

She is doing fine, though. She even found a new favorite piece of art on her walk the day after the bite happened.

Here, the E in the mid-50's between fifth and sixth, to her, stands for EAT! As in eat lots of treats when she gets home.
Posted by Heather Kovar at 6:14 AM No comments:

15 days into the New Year and discarded Christmas trees still line New York City streets. Actually, I shouldn't complain because when walking by you still get a little whif of pine, a much better scent than one is used to. 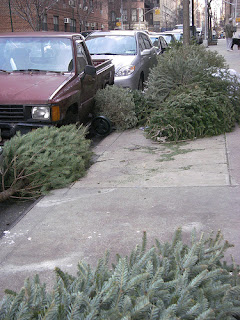 This picture was taken last weekend one block from Riverside park where "Mulchfest 07" was going on. Yet instead of carrying these trees another block so that they could be ground into wood chips and scattered in parks, they were piled on the sidewalk, stands and all, to be picked up as trash.
Actually, the New York City Department of Sanitation has to spend extra money each year to deal with all the trees. Tomorrow is the last day it will have crews collecting trees. Special Christmas tree-only collection routes were established from January 5 to January 16. However, only trees stripped of all decorations (and I'm assuming stands) would be picked up and also gound into mulch for use in city parks.

Trees left out on the street after the 16th will be discarded as trash.
tree+stand.jpg">
However, if you took the time 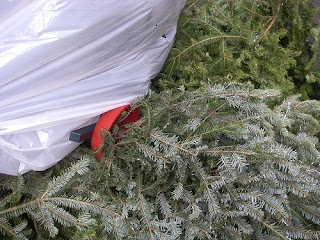 to pick out a tree, drag it up into your apartment, decorate, water and take pictures 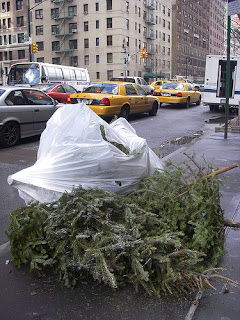 by it during the holiday season, doesn't it deserve a better send off than left out on the sidewalk? If you bring your ch ild to choose a tree, why not teach the child to dispose of it in an environmentally friendly manner? The Parks Department had drop off points in city parks so they could be mulched on the weekend of January 6th and 7th. Why make the city spend money to pick up your tree and take it the park. Or even worse, to the dump?