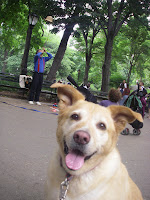 All You Need is An Audience.

Mena enjoys the tricks of others, since she is good at pulling her own. "Hmmm. I could reach the top counter cookies if I could smuggle a stick into the apartment and balance it on my tongue."

So we didn't stay much longer, didn't want her getting too many ideas.


Taking a break to google a statue in th city, a woman eating an ice cream cone approached and asked in her most proper English accent, "do they eh'-ver allow dogs off the leash in the paark?" I explained before nine am and after nine pm. 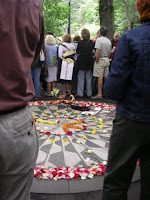 I told her a few years ago on the 4th a friend and I met and spoke with some men from the Royal Navy.

"My husband has a tie with a British emblem on it. He said he was going to wear it out tonight. And I said NOOO'."

Didn't see any of those bloody blokes.
Posted by Heather Kovar at 1:35 PM 1 comment: