The Sex and the City Movie has more "doggy style" than you might expect.
Charlotte adds on to her family, plus another of the girls adopts a pooch.
Even Mr. Big is compared to a dog when Carrie introduces him as her boyfriend. He says he is too old for that, she says, okay, "man-friend."
Big replies that Man-friend sounds like a dog.
"If the shoe fits" snarks Carrie.
While the girls steam things up on screen, Willamena has compiled some of her favorite "cool" places and accessories.

Carrie has her cosmos.
However, Willamena always seems to spill out of those top heavy martini glasses. She much prefers the pint-sized plastic cups she can chew on after finishing up a beer.  Here she is enjoying a cool one at the Sheep Meadow Cafe  in Central Park. She also recommends the West 79th Street Boat Basin Cafe.
Here at the Barking Dog on York and 77th she enjoys sitting outside and lapping up free offerings from the "dog bar."

Better check the line before heading for a burger or frozen treat at Shake Shack. But don't mind the wait. The website suggests meeting a new friend on the "pick up line."

TO "STAY":
In the series Samantha moved into the Meatpacking district and made it cool. In the movie, the friends continue to clank their heels along the cobblestone streets in the area for drinks. The BIG rehearsal dinner was held at Buddakan. The movie ended with a glamour shot along 9th Avenue, with a glimpse of Hotel Gansevoort. (Pet friendly!) The hotel is also offering a special Sex and the City package deal.

Visitors to NYC can get a glimpse of the spots made hot by the girls on the Sex and the City On Location Tour.
TO WRITE:
Carrie writes and checks her email on her MacBook Pro.
(Just like the one Willamena uses!)

Since Carrie refused to borrow Samantha's IPhone, saying she hasn't figured those out yet, Miss Bradshaw could probably use a free lesson or two offered at the Apple stores.

No doubt she could benefit from the workshops offered at all four of the city's stores.

TO GET HITCHED (OR NOT):
Just across from the Apple store on 5th Avenue is The Plaza. In the series, Carrie dreamed of a Plaza wedding.  But then she saw Mr. Big with his new bride, Natasha there.  In the movie, Carrie decides a
wedding at the Library by Bryant Park would be perfect.
Willamena likes the Plaza, especially it's view of Central Park. That is where she chases tail during off leash hours from 9pm to 9am.
TO EAT: 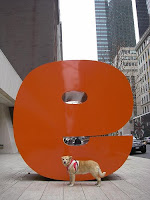 "It was a little past 10 and I was dressed to the nines at Brasserie 81/2" is a Carrie line from the series.
This orange statue is actually a 9, marking 9 West 57th street, which is the address for Brasserie 81/2.
In the movie, Charlotte almost gets to enjoy a meal at Lumi on Lexington Avenue. Click here for pictures from the movie and the menu!

TO PAMPER:
Willamena has booties she calls her Manolo Pawniks. They keep her sensitive paws warm in the winter and protected from the hot sidewalk in the summer.
She also loves the scent of Sexy Beast. It's a New York City line of luxury dog grooming products. (Mena has a photo shoot planned with the products- check back soon!)
Posted by Heather Kovar at 9:14 AM 2 comments: