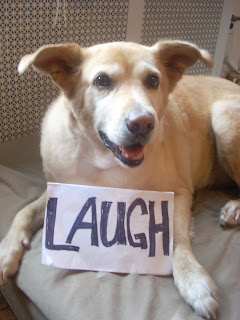 Willamena is a big fan of touring New York City,  but sometimes can get aggravated by all the "strangers" trying to pet her.
She is excited that a joke about HER will be told in the upcoming fundraiser/comedy competition New York's Funniest Reporter by her very own roommate, Heather!

Mena is prepared to make sure you laugh at the joke! Not that you wouldn't anyway...

Here is a page put together by the producer of the even to promote Heather.
Posted by Heather Kovar at 5:34 PM No comments: 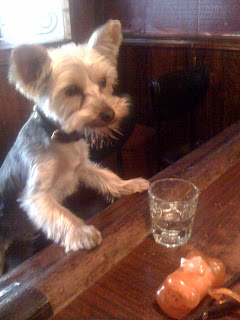 Tired of the bar scene?
It's not often you meet someone as cute as this guy at your local watering hole.
Willamena has been invited to attend and write about  a new event in New York City,  Speed Dating: Doggy Style.
Described as a combination dog walk speed dating event, you date ten people as you walk with your dog. 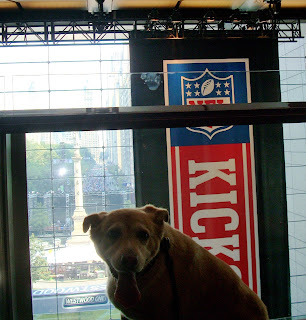 Willamena is ready!
She loves the beer, wings and nachos that accompany the pigskin parties. Oh, she loves pig ears too.
She made a quick stop at the NFL Kickoff Party in Columbus Circle today. 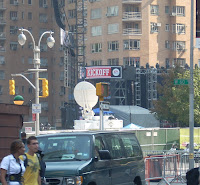 However, since nothing says football like 90-degree New York City streets, she decided to check out the stage and scene from the 4th floor of the Time Warner Center.
From Central Park you could hear the entertainment; which tonight includes Usher and Keith Urban, but you couldn't see the stage.  From inside the gates at Columbus Circle you can see and hear the event, plus stay and watch the game.
Tonight Willamena plans to watch from the comfort of her own spring coil doggie bed as the defending Super Bowl Champs, the New York Giants, take on long time rivals,  the Washington Redskins.
There may even be pig skins.
If you click on Mena's picture and look closely, you can see all the people lined up along Central Park South for the Kickoff event.
Posted by Heather Kovar at 4:25 PM No comments: