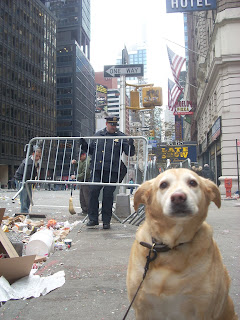 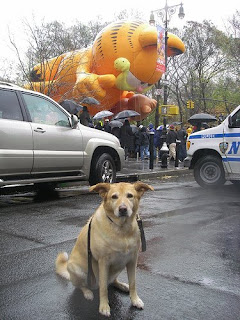 Willamena didn't make it out to the parade itself like in previous years, but she did make it for the big clean-up.
It was a feast for the beast today. There were bagels everywhere!

Check out this whole bagel with cream cheese on Broadway.

She did hear a woman on the street talk about the new Horton balloon: "It was funny, Horton's butt was so big, it blocked the sun for a minute and it got cold!"
Posted by Heather Kovar at 6:29 PM No comments:

Obama Dog Update:
In his first media conference yesterday, President-elect Barack Obama spoke on getting a dog. He said it is a "major issue."
He said his preference is a shelter dog. (Yah! Willamena's advice must have crossed his desk.) Someone from Illinois did vote in her poll below.
However, since his oldest daughter has allergies, he said the criteria for his selection is that the dog be hypoallergenic.
With a shelter dog, you really never know what you are going to get, much less can be sure it's hypoallergenic.
Obama said "but obviously a lot of shelter dogs are mutts, like me."
So I guess we'll have to re-do the poll of hypoallergenic dogs.
Posted by Heather Kovar at 8:58 AM 1 comment:

Barack Obama promised his daughers a dog as soon as the election was over, win or lose!
Now that he is America's President-elect, the choice for the next White House dog can't be an easy one.
When one is chosen, you know there will be many cameras flashing in the animal's face.
Willamena thinks Barack Obama should take in consideration how well the family dog would photograph.
White doesn't always work on camera. The dog could look washed out, as while acts as a spotlight and reflects light.
Mena says a black dog wouldn't photograph that well, either, considering black absorbs all light, the dog just wouldn't "pop."

As for yellow, it works in any light! (Just look at Mena's pics.)

Willamena wants to point out she isn't "breed-ist," she just wants the Presidential Dog to look his/her best.
For this one, Mena endorses a yellow, female, mutt or rescue dog.

Cast your vote in the following poll:
Online Surveys & Market Research
Posted by Heather Kovar at 5:49 AM 2 comments: