This Halloween, The MUTT-ADOR fights the Bear Market! 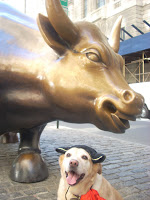 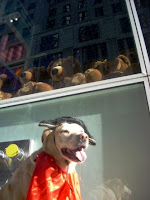 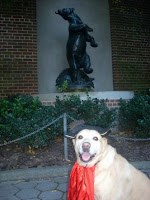 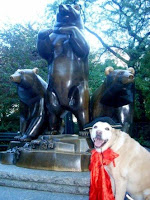 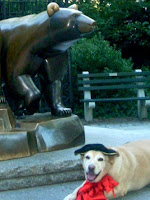 Posted by Heather Kovar at 12:47 PM No comments: 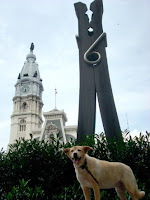 Congrats Phillies fans on winning the World Series
for the first time in 28 years.

Looks like the Curse of William Penn was broken last night
as the Phillies took the Rays 4-3.

The curse was supposedly put in place when a skyscraper
built in 1987 exceeded the height of William Penn's statue on top of Philadelphia City Hall.
(That's the building behind the clothes pin.)

So maybe the Eagles will finally win a Super Bowl. 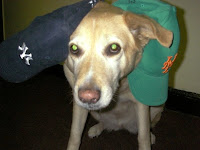 Again, Congrats!
However, as much as Mena enjoyed munching cheese-steaks,
she remains partial to the NYC "DOGS."
Check out her NYC tour of hot dog hot spots.

If you are headed to Philly on Halloween for the championship parade down Broad Street, here are some haunted spots to explore. 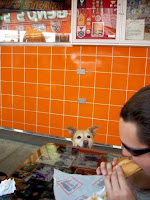 Now discover some of Willy's other Philly favorites. 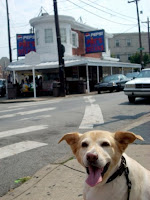 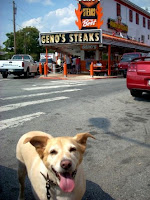 Of course "feeding the beast" is the number one priority, so we head to South Philly for the two famous must-eat-at places, Geno's (1219 S 9th St) and Pat's (1237 E Passyunk Ave)

Both of these cheese-steakeries are dog-friendly because all the seating is outdoors. What's better, they are across the street from each other; so you can grab one from each and compare. Both are open 24-hours. 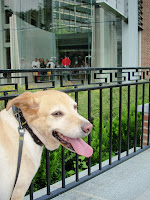 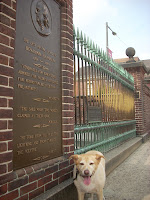 You have to look closely at the picture to the left. Mena is standing as close as dogs are allowed to the Liberty Bell. Click to enlarge.
Enter at Market between 5th and 6th.


To find Ben Franklin's grave, take 5th Street north past Commerce to Arch. You'll find people still throw pennies on his grave. How is that saving?

Mena NOSE money. She sniffed out the United States Mint which is just about a half block block north of Franklin's grave. 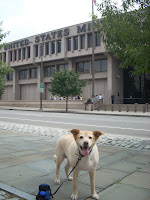 And what is a visit to the City of Brotherly Love without stopping at Love Park?
If you wanted to walk from the Grave at Arch street, it's about 12 blocks west on Arch. 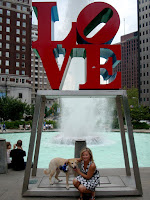 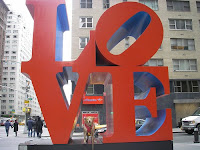 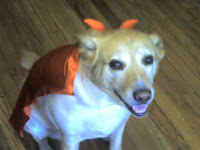 Having already sniffed out some of New York City's Haunted hot-spots, (Click here to see the NYC tour) the Willabeast headed to Philly for some frightening fun in the City of Love.

View Larger Map
The tour begins where you might want to wind-down and warm-up with some hot spiced wine,
City Tavern. 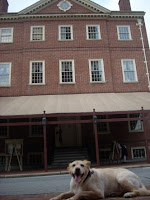 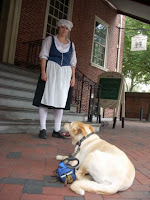 
According to it's website, City Tavern was originally constructed in 1772 and George Washington, among other dignitaries, ate here. In 1948 Congress commissioned the historically accurate reconstruction of City Tavern.
Maybe that is what upset the ghosts that allegedly roam this historically themed restaurant.
Legend says a former waiter was the unintended victim of a bar room duel and to this day, he moves table settings. Drink enough spiced-wine, and you might see a specter in a bloodied white shirt fall to the floor before disappearing. 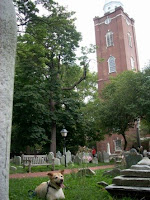 In a quaint residential area, this grave is considered the city's most haunted spot. There is a nice bench or two to relax and watch the locals as they walk their dogs through this pet-friendly spot.
One of the stories even has a ghost dog roaming this graveyard.
A horse-drawn carriage charging through the church and center of the graveyard is a reported sighting. Others say restless Native American chiefs roam the grounds. 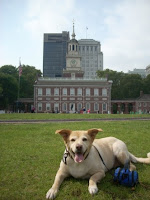 Ghosts are believed to inhabit this historical site where the Declaration of Independence was adopted and signed in 1776.
Check out this tourist's blog if you don't believe ghosts hover here.
You just might see Benjamin Franklin, who has been seen in and around Independence Hall looking at documents he helped write.
According to Mike Tait who runs the Spirit of '76 Ghost Tours, in the 1990's, security guards watching a monitor saw someone standing in a room on the second floor. A guard walked up into the room and reported on his walkie-talkie that no one was there. To his shock, he was told that the man appeared to be standing right in front of him. 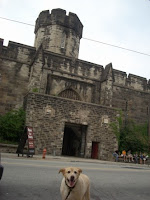 It's not even rumor this place is haunted. It's website states ghost sightings nearly as fact. Pained former prisoners are said to haunt this 172-year-old former state penitentiary.
Even a dog named "Pep" was sentenced to life here. Some say it was for killing the governor's wife's cat in 1924, other records show the dog was donated by the governor to up morale.
Haunted candlelight tours are given here.

The Willabeast enjoyed these haunts of Philly. Come back soon for her cheesesteak eating and monument tour she likes to call "Willa in Phila."
Posted by Heather Kovar at 9:31 AM No comments: 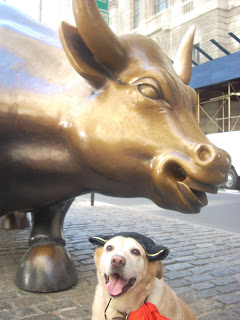 What is SCARIER than this past week on Wall Street?
So for Halloween, Willamena has chosen to go as a Muttador. (She is part mutt, part labrador- get it, mutt-ador?)
She is hanging out with the Bull at the entrance of Bowling Green Park because she wants to remind people to remain bullish in this tough time.
She actually has plans to hunt some BEARS this Halloween. So she will actually be Mena the bear fighting Mutt-ador.


The day Mena visited the bull, Friday, October 10th, 2009, The Dow Jones swung by more than a thousand points before closing down 128 at 8451.19, ending the worst week the Dow has even seen.

Which is why it wasn't an easy task getting near this bull. The real fighting was the crowd. The street was lined with TV News trucks and cameras. Tourists, maybe even New Yorkers, crowded around the bull to touch his parts for good luck.
Posted by Heather Kovar at 7:20 AM 1 comment: