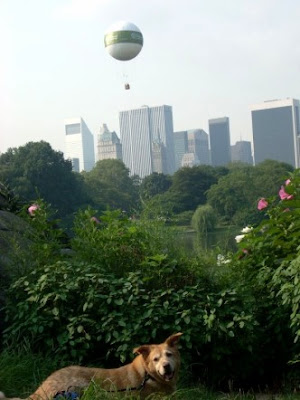 Willamena's backyard, Central Park, is celebrating the 150th anniversary of it's design this year.

Instead of a bouquet of helium balloons --that would only get stuck up in the trees anyway-- the Central Park Conservancy and City Parks & Rec joined with AeroBalloon to offer rides in this large helium-filled balloon through August 22nd.

Willamena hasn't gone up- she prefers to stay grounded. Actually, she's always trying to get at the core of the park. She'd dig her way that direction if she had her way.