Literature is considered one of Ireland's greatest exports. It was the pubs where writers would congregate to meet publishers and other business contacts. So in honor of St. Patrick's Day, we celebrate the Irish pub. 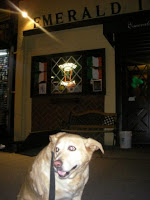 The same Irish family has owned this locals' joint since it opened in 1943. In 2006 it won New York Magazine's listing for the best watering hole of the UWS. The waiters and waitresses have Irish accents. 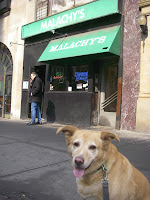 103 West 72nd Street (between Amsterdam Ave & Columbus Ave)
This is a place you could walk by every day for three years and never go in. You might pause to read about the five-dollar sausage and onion sandwich special, but you keep walking.
However, this pre-prohibition pub is rumored to be an old hangout of Famed writer Dorothy Parker and her roundtable. The reviews call is not trendy, not chic and not pricey, therefore a local favorite. 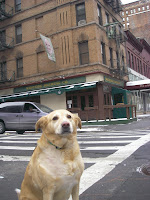 340 Amsterdam Avenue at 76th
Okay, so not an Irish bar. Not even Irish-themed. But you can get a Guiness on tap, along with about twenty others. There is also about a 40-bottle selection. It doesn't brew its own anymore, it contracts out to Chelsea Brewing Company. However, through the 1950's, this used to be an Irish bar called Sweeney's. 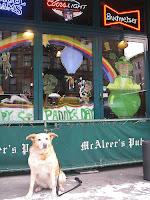 425 Amsterdam (between 80th and 81st)
If there is a pot of gold in the window you know you can't go wrong. Plus there are $2.00 beer specials all week. During brunch you can order probably the closest you'll find to green eggs. It's an egg white omelet with chopped spinach and basil and avocado. Served with a side of mixed greens. You can also get unlimited tomato beer, mimosas, bloody mary's or screwdrivers. 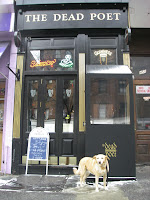 In the true spirit of Irish literature history, this bar is separated from a New York City library branch by only a child's haircutting place.
You can also order one of eight specialty 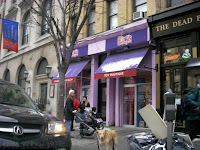 cocktails named for, well, dead poets. The list includes the W.B Yeats, a five-alcohol mixture, the Robert Frost, a vanilla vodka drink, and the Emily Dickinson, a pink lemonade concocture.
You will also get your name on the wall after drinking your 100th Guinness.
Take home your own plaque after drinking 500. 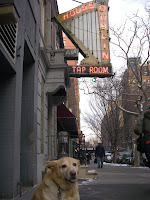 6.Dublin House
225 W. 79th
(between Broadway and Amsterdam)
This neon harp was up as soon as Prohibition ended in 1933. However, this historical bar was run as a full restaurant and bar during Prohibition because of certain business arrangements with the local authorities. Read more about the history of Dublin House here. 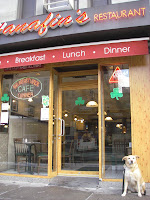 You SEE there are shamrocks in the window. Plus the name Hanafin's seems Irish. This restaurant however, is rated American traditional. You can get anything from pancakes to sauteed calamari to burgers to Egg Creams. Mena approves of the carrot soup. 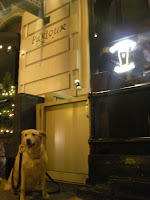 8. The Parlour
250 West 86th street (between Broadway and West End)

This is a tremendously popular Irish bar and restaurant, crowded with the real thing on St. Patrick's Day.
Posted by Heather Kovar at 10:54 AM